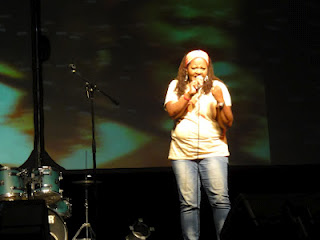 I just wanted to thank you for contributing to my missions work in Bosnia.  Whether it was your prayers or your financial support,  It was a blessing and an encouragement to know that you reached out to help me fulfill this work which was by no means easy but it yielded fruitful results so it was all worth it. I went there with the thought that I may not return because so many people were telling me to be careful and that we were going to a dangerous place began to put fear in my heart. Although I had been there in 2010, there is now the threat of war again, and I had to really take this fear to the Lord and He gave me peace that whatever happens I am in His hands and doing His will.

I have written about it in my blog and some of the highlights were our park ministry where we set up prayer stations in the park to ask people if they would like us to pray for them. We had interpreters to help us.
One man was walking by and when we asked him, he said that God couldn't help him and wouldn't help him. He said God didn't care about him. He said that he was Muslim and that his wife had left him and he had no connection with his children. He was unemployed (the unemployment rate is at 80% in Bosnia) and he was going to be homeless soon. We prayed with him and he watched us as we were trained to pray with our eyes open and giving the person eye contact. He looked at my teammate and said, "I know God will help from the look in your eyes."
Later that night he came to our service where we shared with the 15 believers who have never left Bosnia that there were believers all over the world and that they were not alone. We had slides and a whole set up for them.
He showed up and ended up giving his heart to Jesus that night. You could actually see the transformation! I've been in church almost all of my life and I haven't seen that kind of instant transformation in a long long time.
He actually believed in his heart and God saved him and made him a new creature instantly in front of us!

Another highlight was there was a huge humanitarian concert being held for a little 2 year old boy named Kenu who was diagnosed with an inoperable brain tumor and they were raising money for treatment. There was a stand in the center of town where people in the booth were selling tickets for the event. During our ministry in the park, my teammate told me to go and ask if we could pray for the little boy but the Lord was telling me to go up there to the booth and sing "The Greatest Love of All." I was like...."really?" but I went up there and asked could I sing for the little boy who wasn't there....it was really strange but as I sang, they began to cry and showed me their goosebumps on their arms. I was asked to participate in the concert which I said, "yes" and then I asked if we could pray for the little boy right there. They told me they were Muslim but allowed me to pray for Kenu.
At the concert, all kinds of famous Bosnian and Croatian artists were there singing and the atmosphere was drugs and rock n roll....then I got up to sing O Happy Day which the missionaries there were kind of worried about given the words and the country being muslim but they allowed it and they even sang along.
At that moment the atmosphere of the stadium changed. My teammates were praying and as the Muslims sang "When Jesus Washed...." it was amazing to see....the atmosphere shifted and the darkness that hovered over the stadium left. It was amazing and after I sang, a throng of people got up and left the place.
God used that song so many times to reach them as Europeans consider O Happy Day a pop song....but God used that song to minister to the Muslims.
We went to outskirts of the village to the Roma children (Gypsies) and had clowns...(Nat was a clown!) And we also did all kinds of programs for them. They loved the programs and were a little roudy at first but calmed down by the 2nd day.
We were blessed to see the children attend every program and party we planned for them.
We built relationships with everyone...all muslims, one Communist-Gay-Muslim in the whole town! He was so touched by us reaching out to him as the muslims do not tolerate his lifestyle.
God used us and we prayed for blessings for our supporters....so please know that you are blessed!!!

This is the River Una....I would walk by here everyday in Bihac, Bosnia and everyday the same drunk would say, "Hey Mikki!"  (Everyone seemed to know me...I think because I sang there on TV 2 years ago)  Why wasn't I more aggressive with him...he hung here everyday...unemployed and drunk...about in his 30's.....Should I have followed the disciples example of boldy confronting the spirits in the man, I did tell him that Jesus Loved him and he told me that he was Muslim....I knew that!  I asked him could I pray with him, he smiled and said, "it's okay Mikki"  I prayed for him anyway....Still praying.... 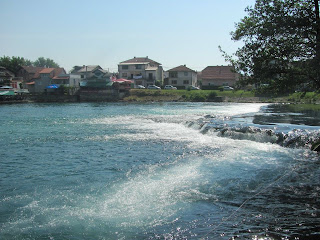 The Lord is impressing upon me that I have to examine myself everyday!!! It's the only way to stay acutely aware of my shortcomings, my "little white sins" that will send me to hell just as fast as the big ones, and everything else that would set itself up against the knowledge of God...I have to be clean to enter the throne room just as the priest of the Old Testament!  I cannot enter the Holy of Holies with sin in my camp!
I've got people to intercede for!  Their souls are at stake!  I've got a ministry that I know God wants to use me in ways that are beyond music!  I've got to stay clean....and so I examine myself!

Going to Bosnia to minister, build relationships, pray and give of myself was easy for me....trusting God to back me up was a challenge at times.  I'm thinking of the woman I encountered in the park in Bihac.  I went up to her to ask her if I could pray for any needs that she had and she told me in sign language of sorts that she was in a hurry.  I couldn't speak Bosnian, she couldn't speak English, but she was also deaf....I asked the Lord to touch her and heal her before we left as a sign to the people there that He is Lord...He is the One that heals!  He is Jesus!....Believe In Him!

I remember the pangs of "What if He doesn't?"  and I still kick myself today because I should have been more bold....I should have had more faith!  shoulda woulda coulda...and now I'm back home....but I'm keeping her face in my head...I'm praying for her that the Lord heals her hearing and that she knows it's Jesus who heals!

And I continue to examine Mikki....
Posted by Soul Saving Center Street Journal at 10:16 PM No comments:

I Whisper Your Name

Posted by Soul Saving Center Street Journal at 9:21 AM No comments:

This is Bihac, Bosnia where I went with a team of 20.  We went through the organization OM.  We were there from June 17-July 2nd.

God did supernatural miracles there and it was beyond what we could have ever hoped or asked for....but one thing we did that God honored....We believed God for miracles!  We asked God to make the book of Acts come alive in that town and He did just that!

A man who was muslim accepted Jesus as Lord and became a believer....
Contacts were made and I was able to perform O Happy Day at a Humanitarian Concert where a huge crowd of Muslims and non-believers actually sang along with me...."When Jesus Washed My Sins Away!"  Praise Jesus...

On the way Home I got to share the gospel with a Jewish young woman from Jerusalem!  She was raised to believe that Jesus was a "Rabbi who had gone off the deep end"  She said His disciples actually started Christianity after He died.  I shared from the beginning of man's fall to the sacrificing of the lamb to John 3:16 where the ultimate sacrifice was made for our sins all because God loved us so much!  She had never heard this before and we shared her prayer book which was Psalms and Songs of Solomen.  She was surprised to see Queen Esther in my Bible...she'd never held or seen a Bible!
Well, now she knows the gospel...let's pray that she becomes a believer and that through her others in Jerusalem will know that Jesus is the Messiah!

Posted by Soul Saving Center Street Journal at 8:50 AM No comments: