"The Ball Is in Your Court Now" 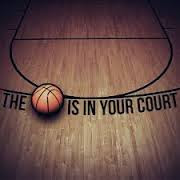 I cannot count how many times I have heard my Dad say this in the pulpit, on the street, personally to people he was sharing the gospel with...."The Ball Is In Your Court Now"  What that means is after you've heard the gospel, you are accountable to God, you are responsible for the truth that you heard and you must make a decision....In other words, Choose Ye This Day Whom You Will Serve!

Last week, while sharing the gospel with a man who was begging while leaning on a trash can at a  Dunkin Donut shop in Philadelphia I bought him a sandwich and lead him to Jesus right there, he got it!.....The ball (The truth of the gospel was his responsibility and he accepted the Lord right there next to that trash can!)

Confronting some young men on the streets in Salem tonight who needed to be reminded that God loves them, the devil hates them and the only way out is Jesus....that's it in a nutshell!  The ball is in their court and has been in their court because they all knew me, I've talked to them before...they listened, a few walked away but the ones that listened understood that the truth is fearless....One said to me, "I know you mean it and I know who you are because you're out here in the dark  talking to us, you're not fake....Thank you for that."

Or sitting with a girl who had heard the message of Jesus preached in such power at the Festival of Life, Kensington and as the invitation came forth to make Jesus Lord of their life...she refused to go telling me she was Muslim and was only here with a friend.  And so I sat with her and shared my story with her and what Jesus did in my life.  She could refute the Bible but she couldn't tell me my story wasn't real...I know what Jesus did in my life....and I told her straight up of His mighty power to save.  She still refused, The ball is in her court now.

Don't get discouraged if people don't accept what you are saying, say it anyway!
Don't worry about the fact that people are not open to the truth....once you say it, the ball is in their court!  Remember it is God who draws man to Him.

Keep telling people about Jesus!  The harvest of souls my Father won for Jesus all came to the Lord at different times....sometimes it was years after my Dad talked to them, preached to them, fed them, helped them....

Studying the book of John, we see that Jesus did miracle after miracle and some still refused to believe in Him.  Are we greater than Jesus?  Just keep telling them!

Shout it from the Rooftops!
Jesus is on His way back!