Taking my cousin home, I went down Olive St and I heard this verse screaming in my spirit as I looked at the lost souls sitting on stoops, standing around blitzed out of their minds.   Especially the one whom God told me to warn....I was instructed by God to warn him once more.

I took every one home and then went back there.  I got out of my car and I shared the gospel with force, love and obedience.....but I told the truth and exposed the devil for the liar that he is.

The 3 on the stoop listened intently and told me they knew I was telling them right.  One said, "I love you!"  I told them I loved them too.  I told them that was why I was in front of them telling them that Jesus breaks chains!  He will break their chains but they have to make a decision to not sit here until they die!

He told me he didn't want to hear it.  He told me this the last time...I told him his time was short on earth.
He said he loved me, I told him I loved him and if he didn't give his heart to Jesus now, he was bound for eternity in hell.

I felt as if a weight was lifted off of me but then the hurt of him rejecting God left me too.  It's in His hands.

Why sit here until you Die?

Jesus Is The Only Way 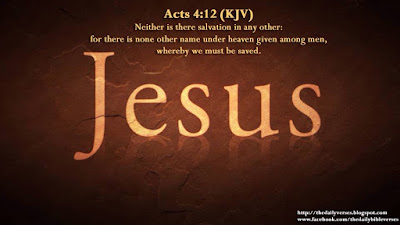 Soul Saving Center is a wonderful place to pray, prepare for tomorrow's message, enjoy quiet time with the Lord.  I love it!!!
But today before going in I saw a group of young men sitting on steps across Broadway so I put my tote down and walked over. One guy was talking about how someone was about put a gun in his face but something warned him to turn around....I listened to his story and then asked him what was that something that warned him?  He responded, " Oh no, not that....I know it was God I was raised to be a Christian...". Then he proceeded to tell me who was Muslim in the group and they probably don't want to hear this....Still I gave the Message of God's Love and why He sent His only Son.
One Muslim stood up and mumbled something to me, I asked him what he said, he said, "Why are you lifting Jesus above God?"  And walked away....I never got to answer him.....
Now here's the good part....
I went back to the church to pray and I kept hearing "There is no other name under heaven, whereby men can be saved, other than the name of Jesus!
I said "Lord he's gone... You want me to go back out there? ". All the while I'm walking back outside and I see him sitting on the steps....I prayed, "Lord if you want me to tell him this, when he sees me coming towards him, don't let him move.".
He didn't move...
I told him I just finished praying for him and I said, "The Lord told me to tell you this... There is No Other Name Under Heaven Whereby Men Can Be Saved...Other Than The Name Of Jesus! He is the ONLY WAY THE TRUTH AND THE LIFE.  I then left and walked back across the street to the church....
I wonder what Jesus is doing over there now? #AngelsAreBusy
Posted by Soul Saving Center Street Journal at 6:36 PM No comments: 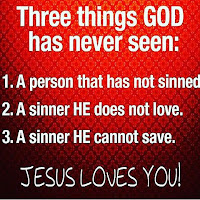 I just want share my encounters this morning....I was taking care of some things before heading to work....On a corner I see this same man that I usually see early in the morning looking haggard, like he's been up all night."
I felt from the Lord to pull over and after our pleasant "Good Mornings" I asked him how he was....he began to tell me of the pain he was in.  I know he has a serious drinking problem but you can't come across a nicer guy....he just needs Jesus.
I listened to him and expressed concern for him.  And then I began to talk to him about asking God to deliver him....I asked him "I've talked to you so many times about your life...about God who loves you so much and about asking Him to change your life...save you...why don't you ask Him to deliver you?"  He said something that really struck me.  He said, "I don't want to play with Him."  I told him that God knows him and that he is being respectful."  But I told him that God can deliver him but also take away the desires and things that he thinks he cannot let go of...He said, "I believe that."...

And then along comes another guy....with his bottle in his bag...."Hey how you doin?  You know I love you!  I've always loved you!!!  Do you  know who I am?"  "No" I answered.
He said, "Your dad had my picture up in his barbershop when I was boxing!"  And through the worn hairy, dishoveled downtrodden look on his face, I saw that boxer on my Dad's wall.  I told him I remembered him and began to talk to him about asking God to deliver him.  He said "you sound like your Dad!  We were close."  I asked him if my Dad ever talked to him about his soul, he responded"All the time!"  I continued to talk to both of them and then drove on to work.

But while driving I began to think about what the first man said, "I don't want to play with Him."  It struck me that this man would rather not play games with God and remain in his sinful state until he felt he could change.  I thought of the verse "No one can come to me unless the Father who sent me draws them... "  John 6:44.   I believe he and I have had so many conversations because God IS drawing him....but how many Christians are taking their salvation for granted?  How?  By the lackadaisical way they live for God, their prayer life or lack thereof, loving people the way Jesus commanded.

Are we taking God for Granted?  Heaven forbid!

I'm going to keep talking to this man and others...God is drawing people to Himself.

The wicked flee though no one pursues, but the righteous are as bold as a lion. Proverbs 28:1 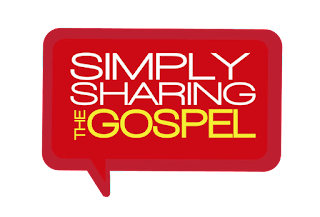 I haven't shared too much from the SSC street journal in a while, but I feel like writing again....

Tonight as I ran errands for my Mom, fixed dinner, ran to the market....all I kept seeing was lost souls...carrying their black bags full of their version of peace and joy and even love...Young women high and slurring their speech, half dressed and oblivious to their surroundings or how they were behaving.

I interceded for them all but after I finished taking care of home I hit the streets.  I just couldn't take it anymore....too much prayer is going out for these souls and they needed to know that.   Every Sunday we at Soul Saving Center stretch our hands out towards Salem and intercede for every lost soul.

I started out on Union St.  I parked my truck and walked up to about 10 young men gambling, smoking, cursing.....doing the usual.  I gave them the gospel and then God told me to pray right there for them.  They continued cursing, playing cards while I took them to the throne room.  I was loud and earnest in my petition to the Chain Breaker.....Soon they all quieted down and when I was finished I knew God had caught the ones He sent me there for....they were asking about me after I walked further down the street to minister to some more people....I preached to people in cars, on stoops and those on bikes.  That look in their eyes...the look that says, "I really need help, I need to change, I need something!"  I know that look so well...

I invited them all to church and told them I loved them...They said, I love you too....

God is  always with me, especially in the streets....He lead me to the motel in Salem.  I walked up to a guy who knew who I was...I had ministered to him so many times and hadn't seen him in a while.  He was in jail and had just gotten out.  He had the ankle thing on him but he introduced me to his buddies.  One knew my Dad and we laughed about the "Irv Grip" when he gripped your head and turned it while cutting your hair your head was in a vice grip!  But then I got down to business.  I knew God sent me there.  There was that look again....the look of desparation on a man's face that lets you know you are hitting him where he lives and he wants out but doesn't know how.....I prayed for each one individually and sang for them....

I've got a lot of people to pray for....If you would just pray for Salem during your devotions, put Salem on your prayer list.....God loves this town...and I told so many that tonight....

Two sermons: One in Soul Saving Center and one in the Street

It's a wonderful thing to obey the Holy Spirit!

After our service today where the Lord was high and lifted up and God is really showing Himself to be our faithful good good Father; I thought the rest of the day would be spent with family....and it was.

But right after church I was driving my cousin home and turned down Olive St. and there were about 6 or 7 men hanging out....just looking like they needed a good dose of the Word.

I pulled the car over and some of them knew why I pulled over.  I dove right in as the Holy Spirit gave me words that were from His heart to them.  I could feel His love for them.  And the Lord was really stirring me to share the gospel in such a way that I felt an anointing that let me know that God had them there, waiting for the Word.  Oh how He loves His lost sheep!

They listened and as my mother remarked later...."Not one them walked away."  Sometimes one or two may walk but the majority listens....I've done this many times but I wanted to share today because the Lord really let me know so intensely how much He loves them.  They nodded, laughed and smiled as I shared the gospel with some humor and a lot of Scripture!   And I left them in thought because the Holy Spirit was at work and the devil had to stand back and watch!

All I can say is to God be the glory!!!  Jesus Loves Salem and He loves those men and as we stretch our hands out towards Salem every Sunday interceding for the people of this town called "Peace!"   I know God is at work....

I praise His Holy Name!!!